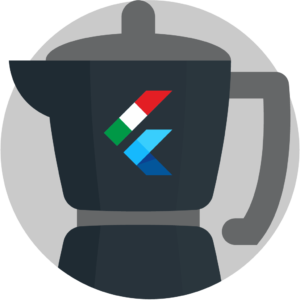 After some time I finally return in my blog to write some stuff!

So, any of my readers know Flutter?

Flutter is a wonderful framework (which is a group of libraries and tools to build used by programmers to build application in a easier and faster way), developed by Google starting from 2017, open source which let you build cross-platform application between Android and iOS using just one code written in Dart.

With Flutter you can also build other than iOS and Android apps, some web applications which it will be executed online (PWA).

Actually Flutter Web is in a beta stage, but in future it will be probably added to the latest available branch (the release one).

On 13 of November, I had a talk with flutteritalia.dev’s guys: we had our first online event (it is the title of this ): Flutter Espresso!

Flutter Espresso is a space where you can have your own talk about the argument who you like most: if you want to have a space inside this…space, yes, you could have it! Obviously your talk must be about something Flutter-related!

Flutter use a cute thing: Widgets. Everything is a widget, exactly like puzzle pieces or LEGOs. No matter what you are going to do, the important part is about finding the correct pieces and to build something, like you should do daily.

You can watch the talk in Italian on my official channel, or on the official FlutterItalia channel

What’s the name of the talk? #IntroFlutter - an introduction from beginner to beginner

This talk speaks about an introduction for novices, made by a beginner: I am not a master of Flutter despite of what I am talking about and I am a novice as well.

Let’s face the truth: nobody knows how to properly do every single thing we know in our entire life. We can’t stop to learn and to get better with everything new or not new learnt…

Slides here (in Italian): #IntroFlutter - an introduction from beginner to beginner