Do I even know where I found the time to get involved with Linux Day this year? It has been an unique experience, as every event I partecipate.

I mean, I’ve been really busy this period with stuff and things to do… but, after all, I have found some time to share my experience.

Before proceeding: this talk is in Italian. Perhaps, I am going to write down a transcript in English. It is not 1:1, but it should explain pretty well what I wanted to share.

Talking in front of a webcam is not so easy as you may think: sure you will used to do it, but it’s strange because all that interactive part with the people get lost so you feel a little bit uncomfortable, like you’re talking to yourself.

It has been an experience, of course, but it’s strange. However, I would reccomend it, since you don’t have all eyes on you.

We all live in an interconnected world, where information becomes personal (so more important); in the field of social relations, we are used to receive answers from anyone in a few hours and we live in the gluttony of likes and shares.

The objective of this speech, will be to make people more aware of the time spent in front of a screen, illustrate the experiment “Disconnected” and present tools and solutions to monitor the time spent with technology.

“The original idea of the web was that it should be a collaborative space where you can communicate through sharing information.” -Tim Berners Lee

I put a beautiful quote from Tim Berners Lee, one of the fathers of the internet, this is linked to a great question: what about us? how connected are we in everyday life? Connection can have many meanings: social connections, understood as, to use an English term “peer”, that is, having relationships with people we surround ourselves with; physical connections with objects, connection as dependence, bond … but for a moment let’s put aside these interpretations and let’s focus on web connections: every day we are literally in contact with connections of different types, such as social networks or real-time messaging services. Every day we talk and try to have different social interactions;

You are going to tell me “everything is beautiful, but what are we going to talk about today?”

And you’re right, I’ll tell you right away: today’s talk is mostly a chat: we will talk about connections, about Disconnected, an experiment that I did and that I invite you to do, and about solutions to make your life more productive and carefree .

But let’s start with the data: the protagonists of this year’s Linux Day.

So, let’s take Whatsapp as a case. 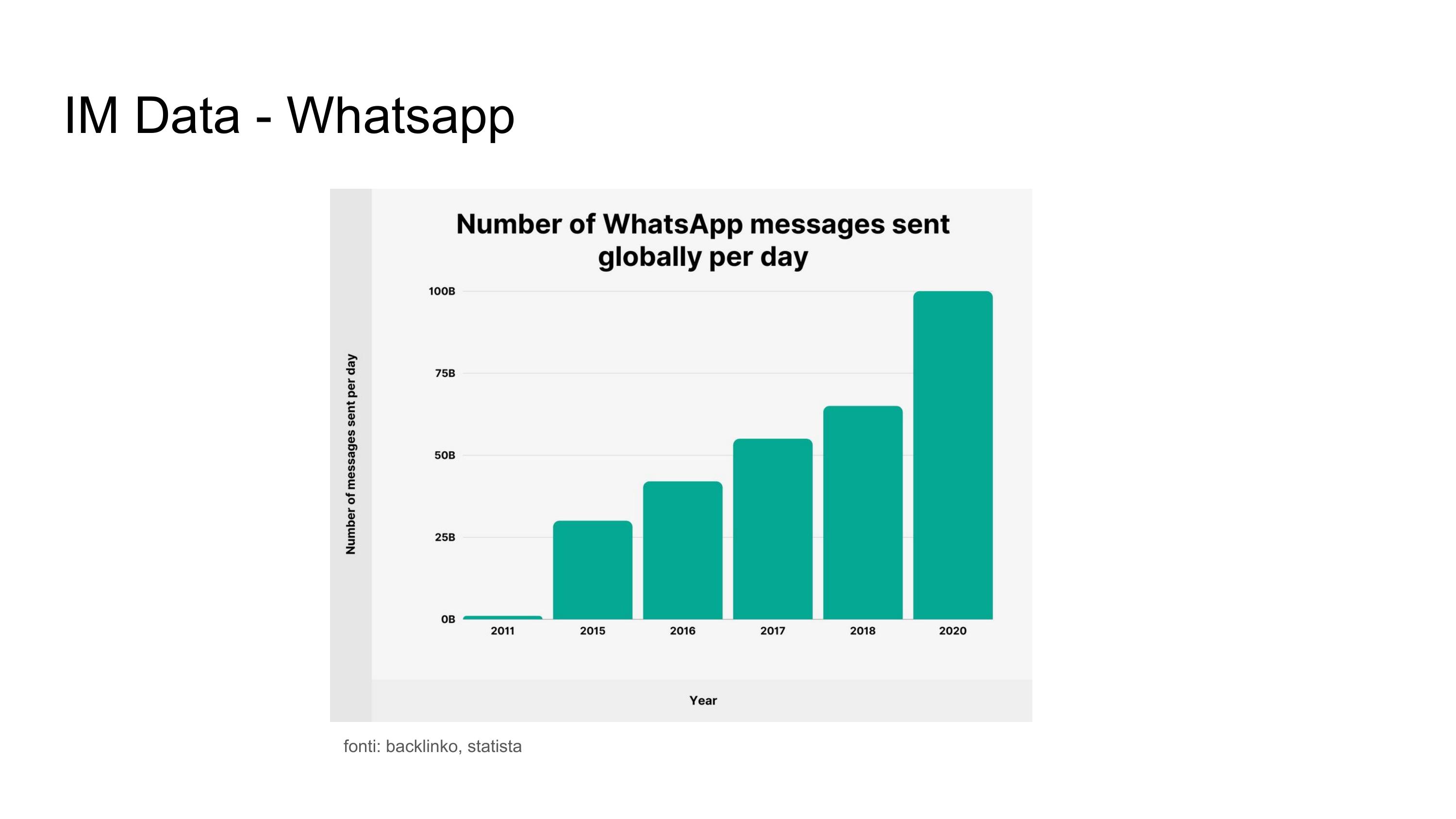 Will Cathcart, the head of Whatsapp (and not only him), says that 100 billion were reached in 2020. 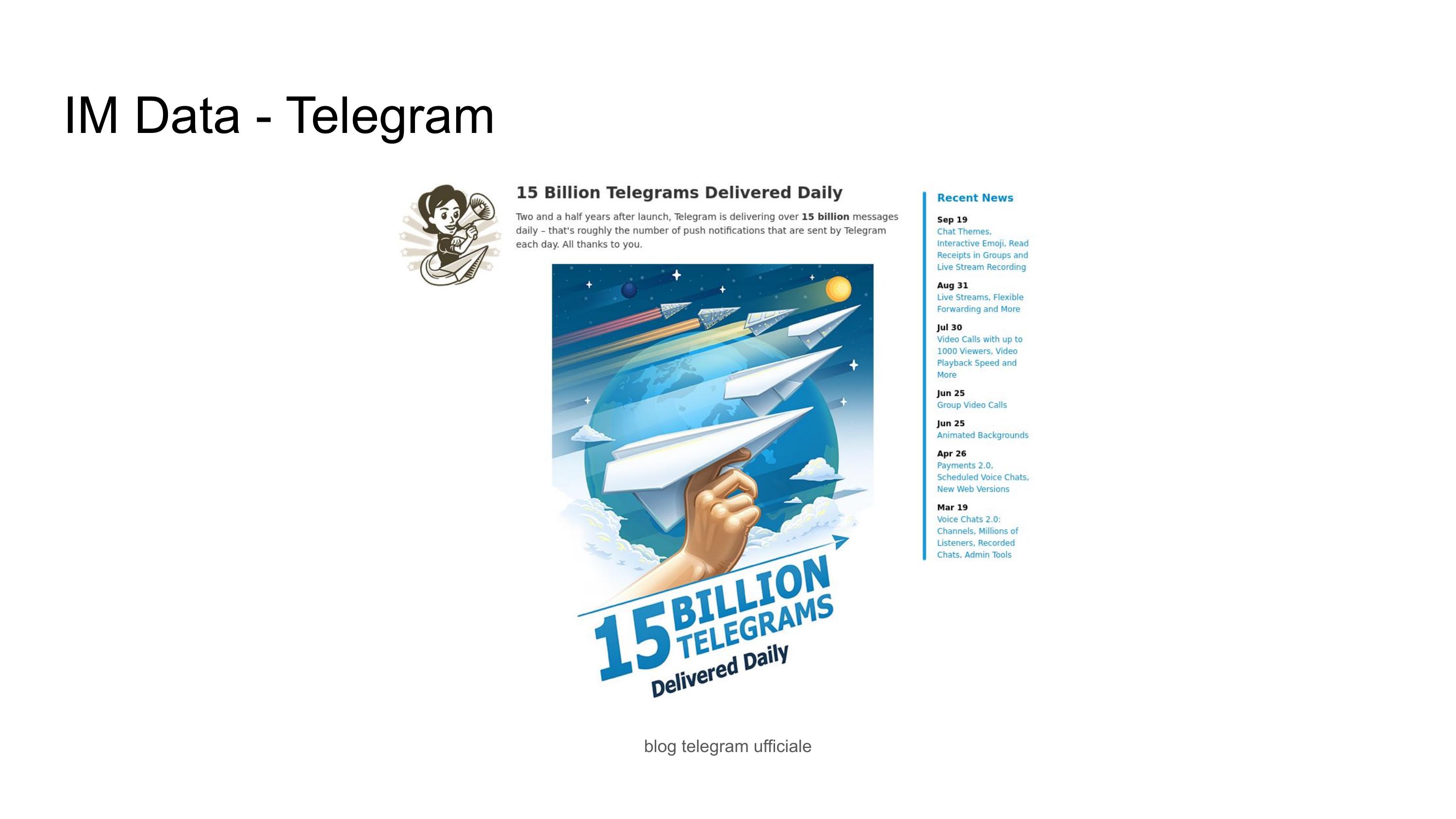 We also take telegram data from the official blog: 15 billion were reached in 2016.

Among other things, the blog is really beautiful, it has really original illustrations and you can see that they invest time and resources in it.

Where does this data go? To who? And are they just IM’s? Obviously there is more: let’s go and discover it together.

These are not simple questions, does anyone want to hazard any number?

The specific questions are: “how much time do we spend on social networks per day” and “how long do we use the phone in the course of a day” 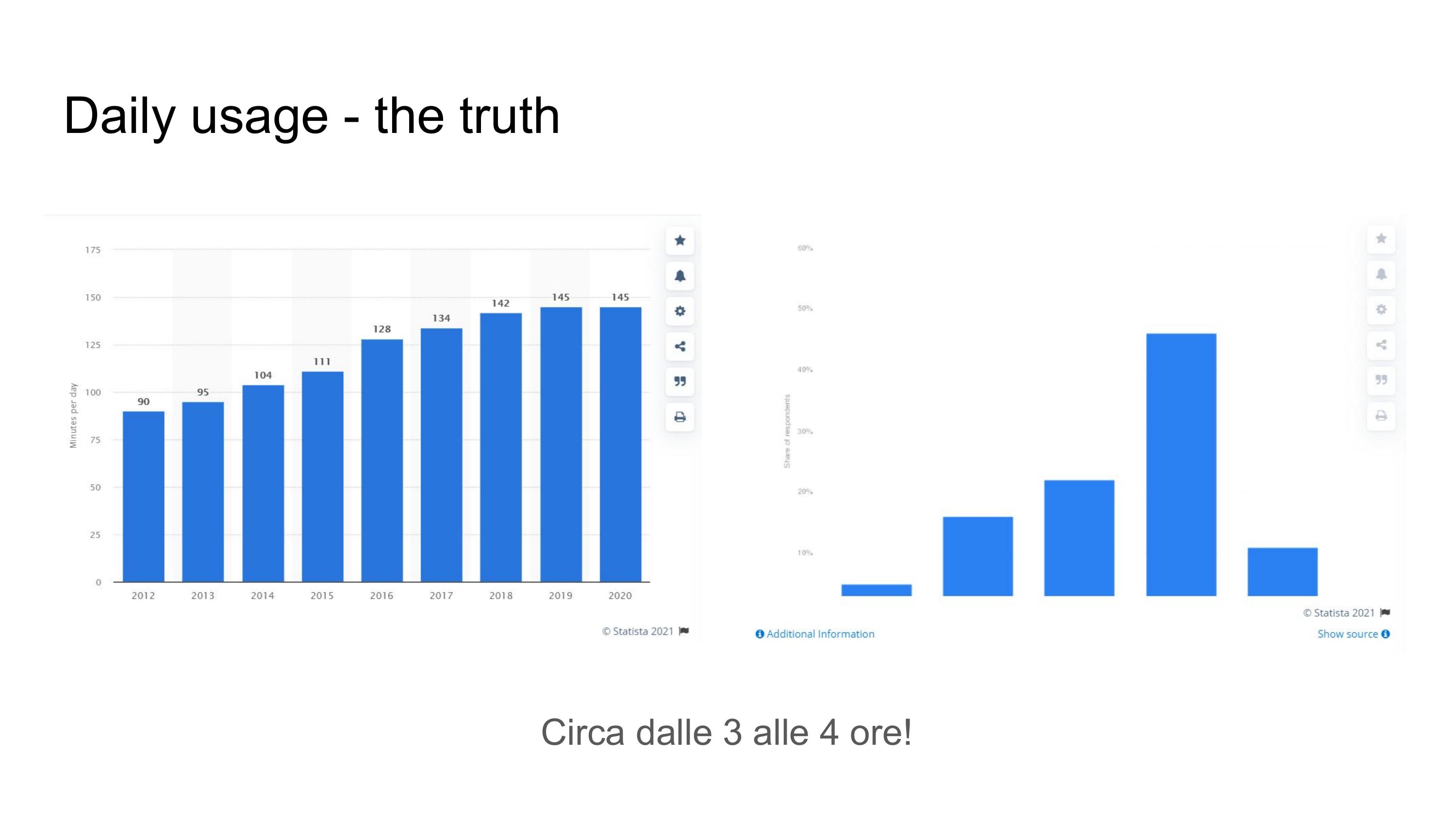 Some interesting links: Daily social media usage worldwide and time spent per day on smartphone in the US: from 3 to 4 hours

As you can see, we spend about 4 hours, of which 2 on social networks. A considerable time, considering that the day is divided into 24 hours in which we use 8 to work, 8 to sleep, and the remaining 8, 4 on the phone.

The point is: we spend a good part of the day at the phone without even realizing it.

You will agree with me that many things can be done in those hours.

Now I would like to introduce you to “Disconnected”, which by the way is the name of the talk. Disconnected is an experiment that I conducted on myself from March 20 to April 4.

A bit of context: I don’t know how many of you know (or maybe they are all university students who knows, I explain briefly), the university is divided into semesters.

Each semester has dates for taking the exams.

In the winter session, the exams are held in January and February; when I started the experiment I had returned from an almost disastrous exam session and I had not rested at all.

Eh, an excellent question: I asked myself that too. Practically I completely lost interest in everything related to the university world. That is, I was almost wasting a year and a half of work.

When I realized it I was obviously in panic: I could not understand, because after a year and a half of work this change of will had happened overnight.

Initially I had decided not to go to university anymore and not to take any more exams: so far, you say, all is well. So to speak eh, but all good. If it weren’t for the fact that about three days later, I can say “woke up” and I realized that I was spending a good part of the day on the phone. Not the usual four hours, but many, many more!

The day I “woke up” I decided to do this experiment: I would have been without a phone for two weeks, and if I would have liked it and it would not have been too much of a problem, then I would have continued.

Ah, obviously I hadn’t solved the “university problem”, but then we get there, now it’s not important.

The rules I imposed on myself were the following:

In the period between March 20 and April 4, I was almost “socially isolated” from the world of the Internet.

The second point is fundamental, and at least in my case it made me come to a conclusion: when we are bored, we use the telephone to fill that “void” that boredom leaves us. It entertains us, immerses us in real and non-real worlds, makes us feel part of our little part of that world and we continue to use it for the simple fact that it is an infinite source of entertainment.

Analogous speech for the computer, except that we prefer the telephone for a matter of immediacy and speed.

After three days of “boredom” and the thought that “oh let me check a message !; ah no, I can’t “, which was not so boring because I was completely immersed in my thoughts, I began to reflect clearly on the university problem, managing to come to the conclusion that perhaps I had to change myself; not having planned anything and not having a good method of taking notes were the causes.

I’m not here to tell you this, I have already written a small section on this blog, and maybe in the future I will talk about notes (btw, check out this link if you’re interested about how I changed my way to approciate notes), that what I can tell you is that after having devoured those books in just a few days, I resumed planning and studying for the university with enthusiasm and motivation. 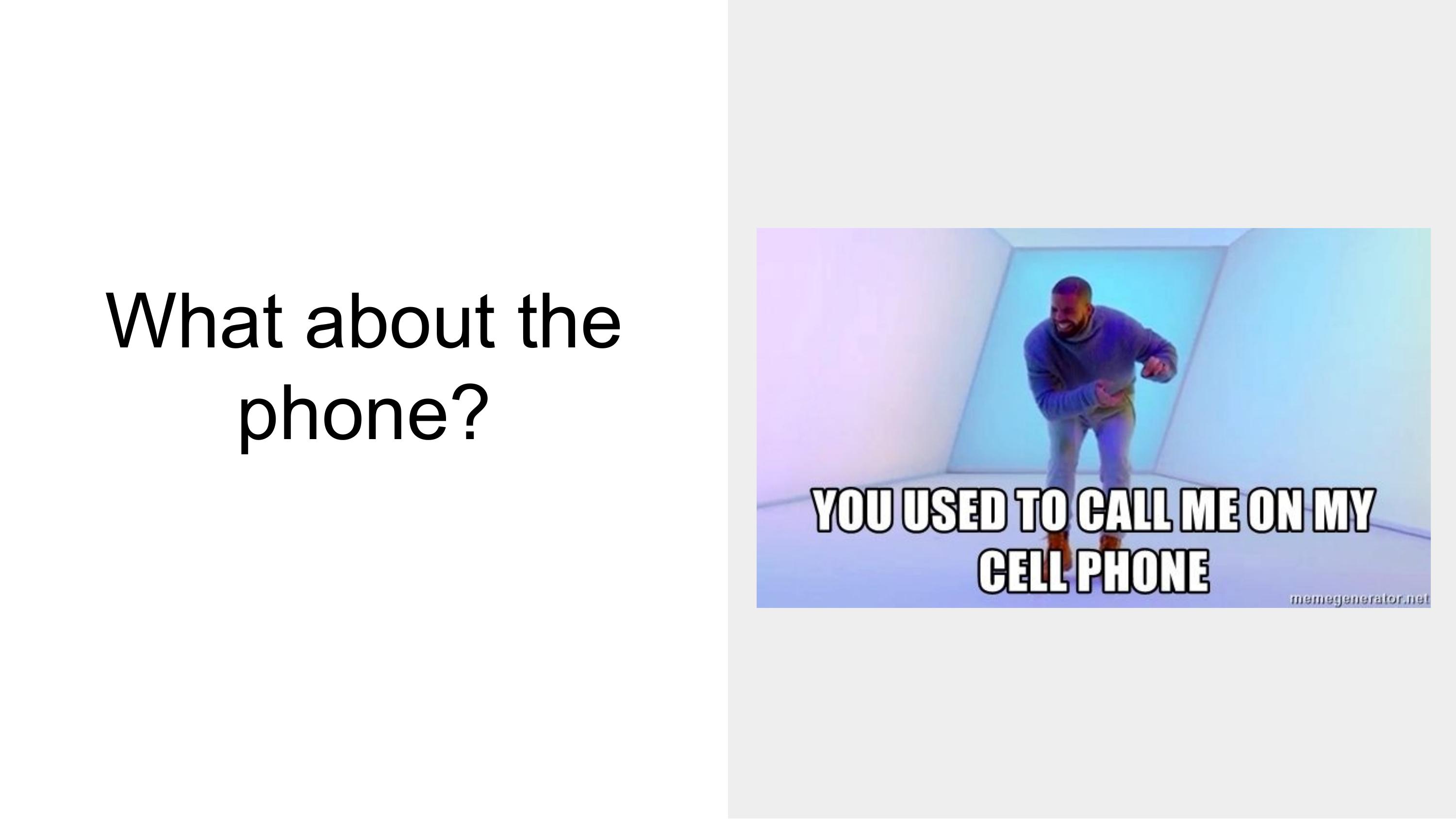 Well, the phone was there: I used it for the important tasks I mentioned earlier; there were four or five people who texted me to find out what happened to me (I hadn’t warned anyone, I had left without warning from any application) and every now and then in the evening it happened to chat with someone, but really little. 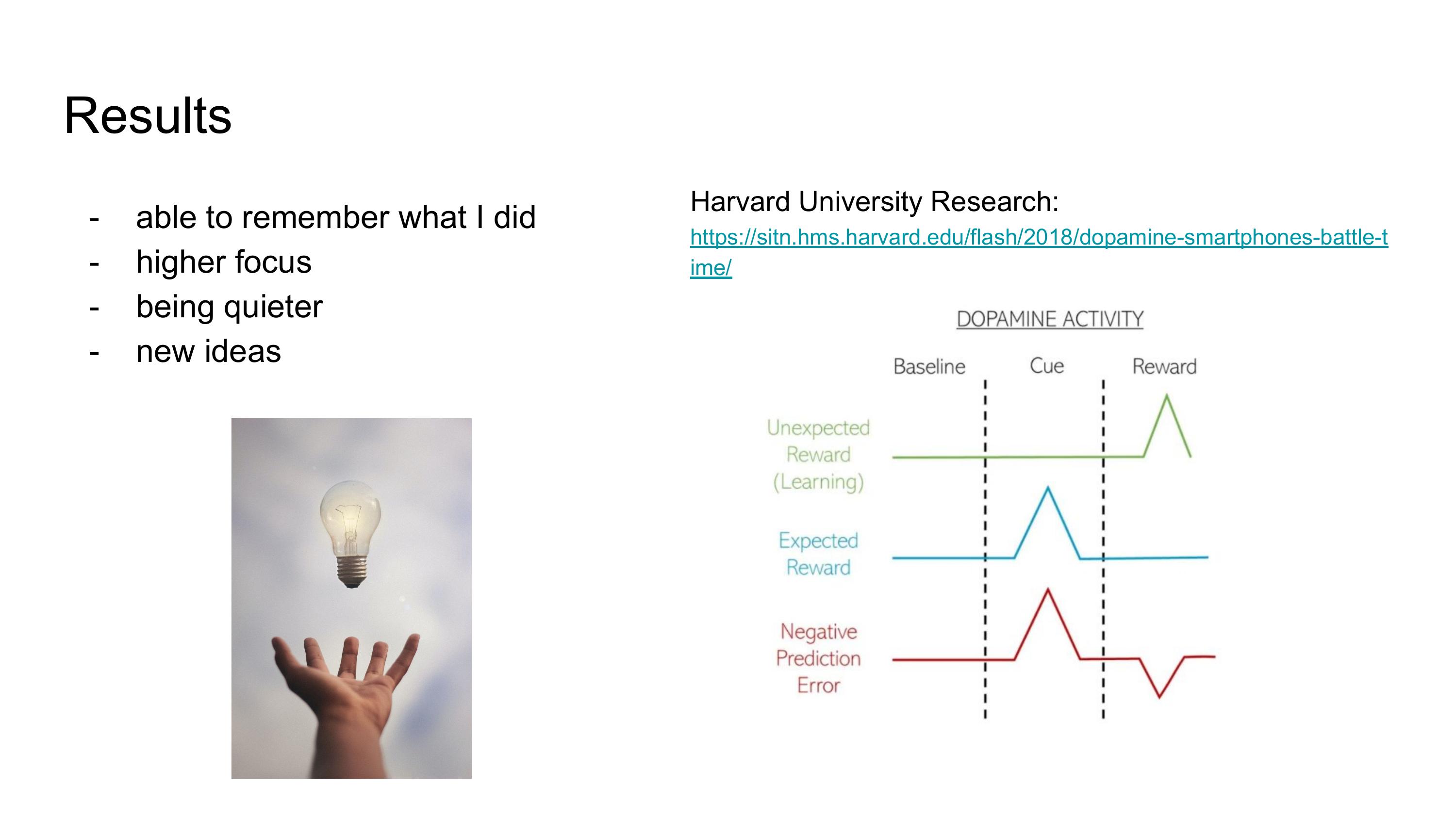 This experiment brought positive effects in every aspect: I was able to remember what I did or read, I had greater concentration and I was able to concentrate much more on the actions I was doing, I was a volcano of ideas (each time I had a different idea in mind on any topic) and in general I felt calmer, so much so that the last day, the 4th, Easter day, I didn’t want to turn on and reinstall the apps on the phone anymore. I was really fine.

But I decided to reinstall everything anyway: some things cannot be avoided, especially when you are part of groups that manage.

In two weeks a lot of things happen; I let you imagine the amount of notifications that day, between two-week-old messages and Easter greetings.

The notifications have almost a feel-good effect that I was not aware of in the slightest.

This article on Harvard’s Website shows off that there is a correlation between dopamine and notification. I was really blown away, it’s amazing.

What about you? Would you ever be able to do such an experiment, even for just a week?